Having fun making a pan flute

I started making my own native flutes from bamboo almost a year ago. I've since made some Native American style flutes, South American style flutes (Quena, Quenacho, Quenilla), Chinese Dizi and drone flutes but one thing I've never really tried yet but that is dear to my heart is the pan flute.

When I was a kid, I got enchanted by the sound of the pan flute thanks to TV series such as The Mysterious Cities of Gold or popular songs such as "Song of Ocarina".

Making my own pan flute in the C major scale

My main issue was to find bamboo that is long, straight and round enough. However, after a long time of waiting, I thought I'd give it a try anyway with what I have and deal with any imperfections:

After cutting the pieces of bamboo and adjusting their length to get them to the correct key thanks to a tuner, I glued them together using hot glue which allows me to re-adjust them if needed by just heating up the glue. I used a 16 gallons plastic drum as a curved support to shape the flute: 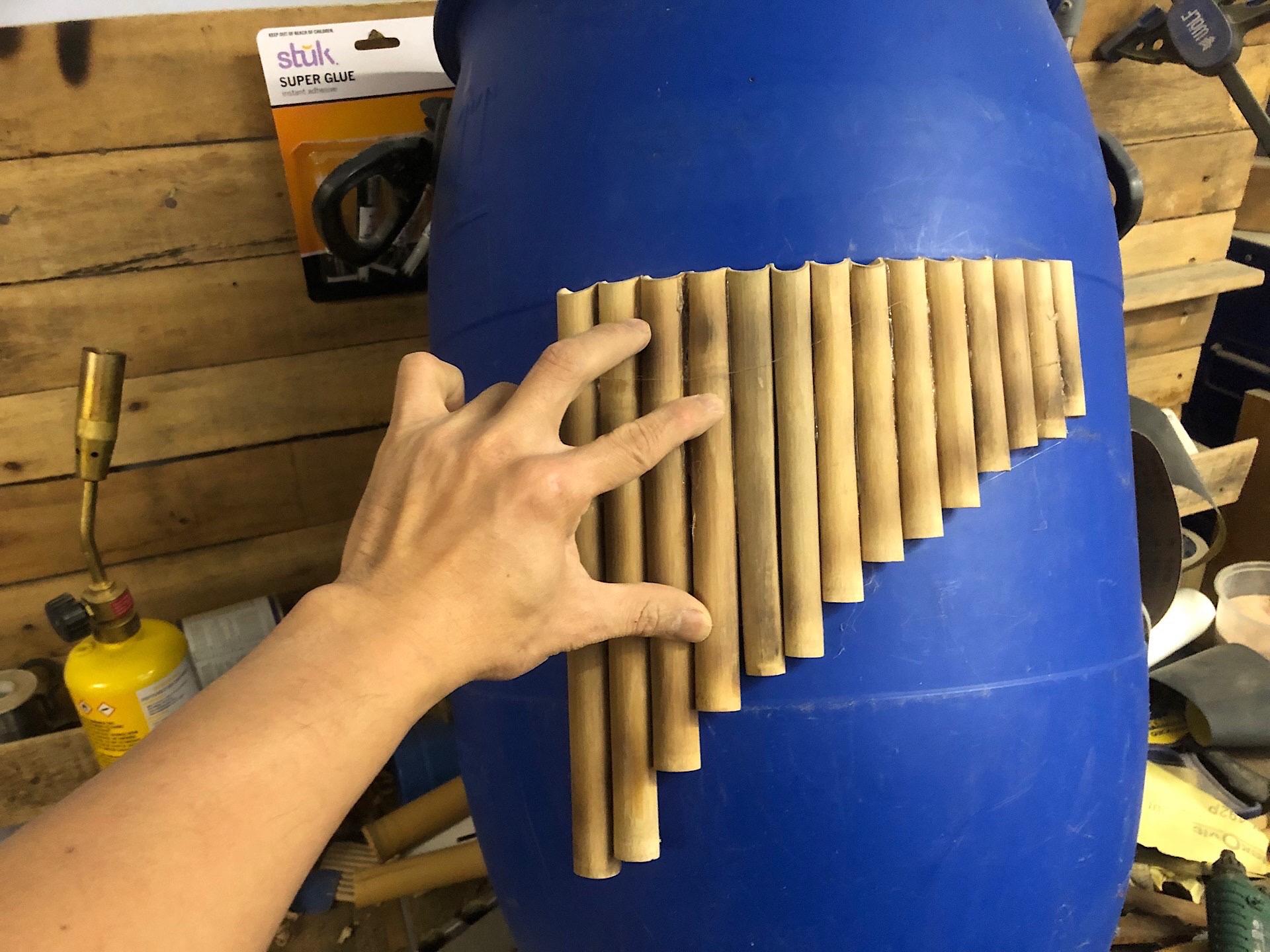 Once the glue has set, I decided to use some vinyl plank off-cuts to make a frame for my prototype. The vinyl is pliable so it makes it easy to bend around the pipes: 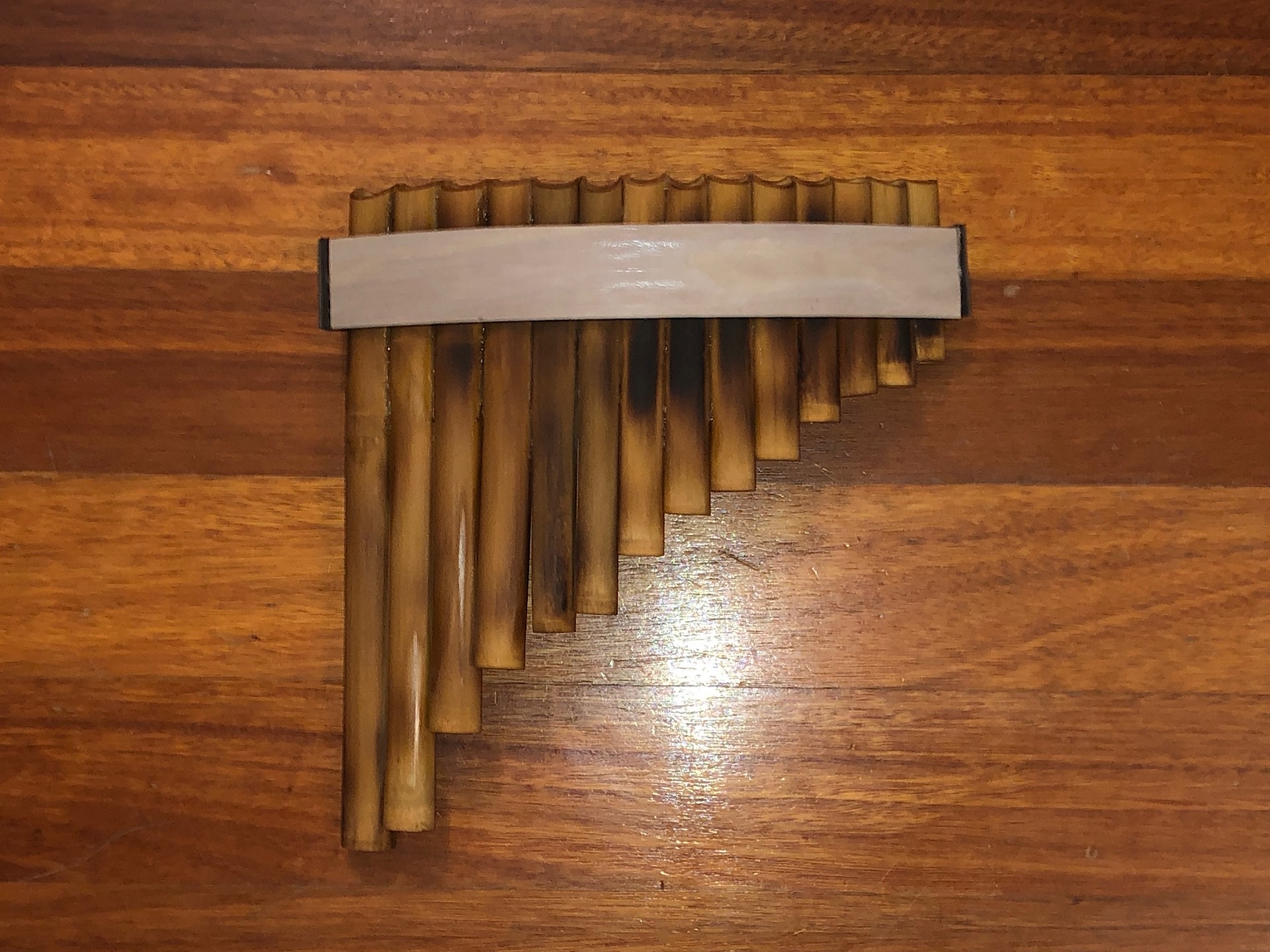 This first pan flute prototype had 14 pipes (notes) which was enough to play quite a lot of tunes. For my first test, I recorded "Memory" from Barbra Streisand, a quite popular song to play on the pan flute:

One thing I realised was that using vinyl made the pan flute so heavier than it should have been. So couple of days later, I decided to replace the vinyl frame with one made with black bamboo. In the process, I added 4 more pipes for a total of 17: 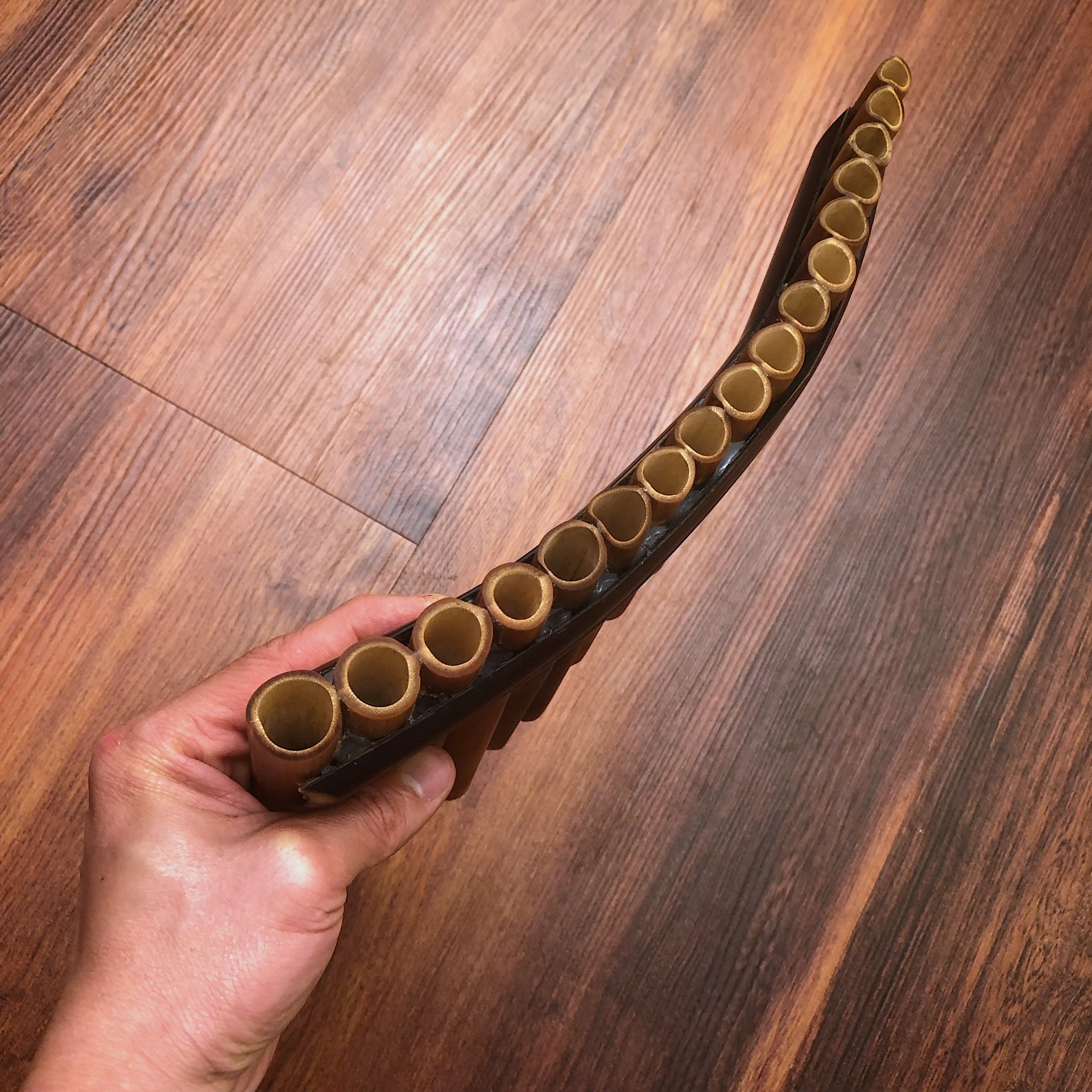 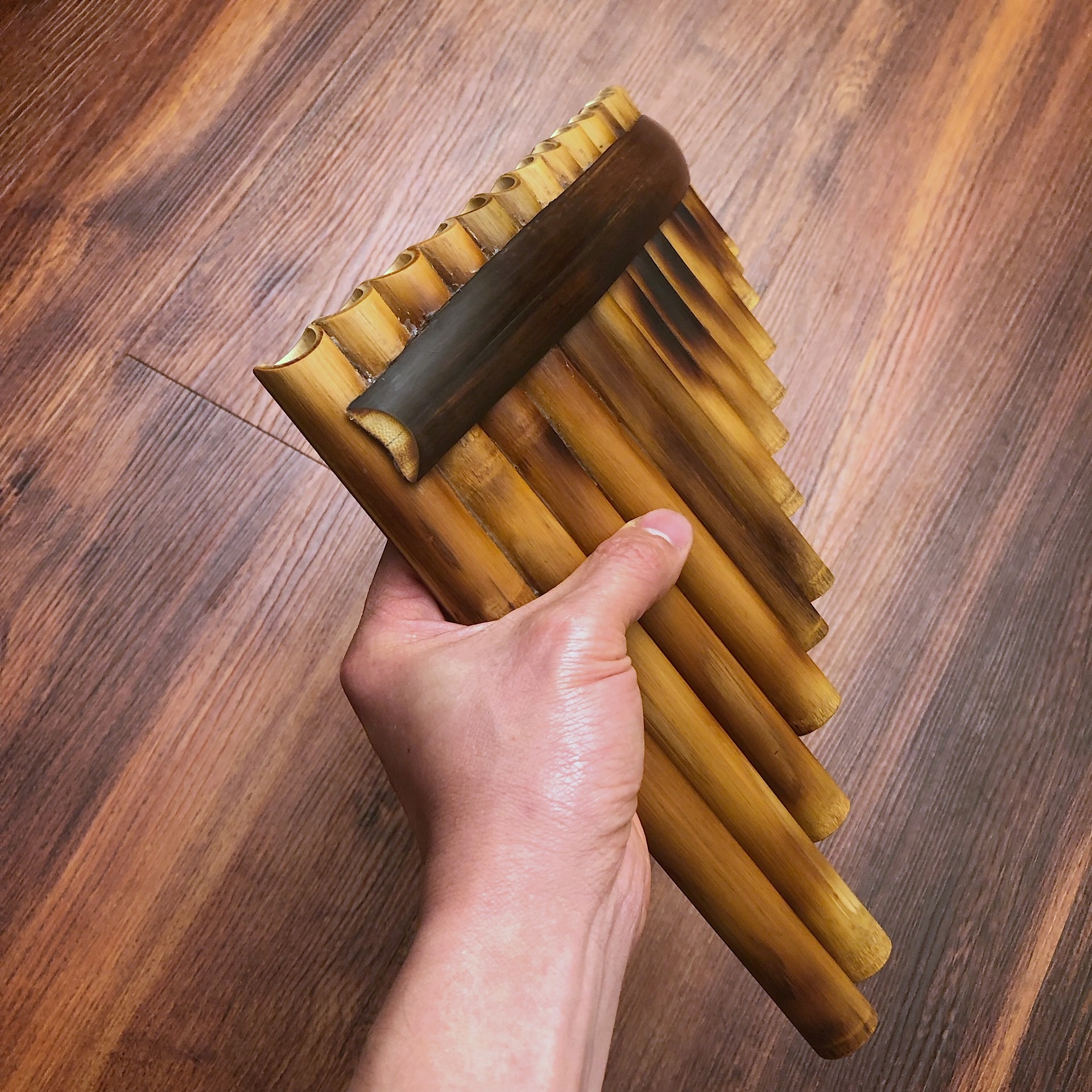 The end result was exceeding my expectation and I turned that prototype into something more permanent by hiding the excess hot glue and gaps between pipes using some dark wood filler. It's not as shiny and smooth as professional pan flutes but it does have its character: 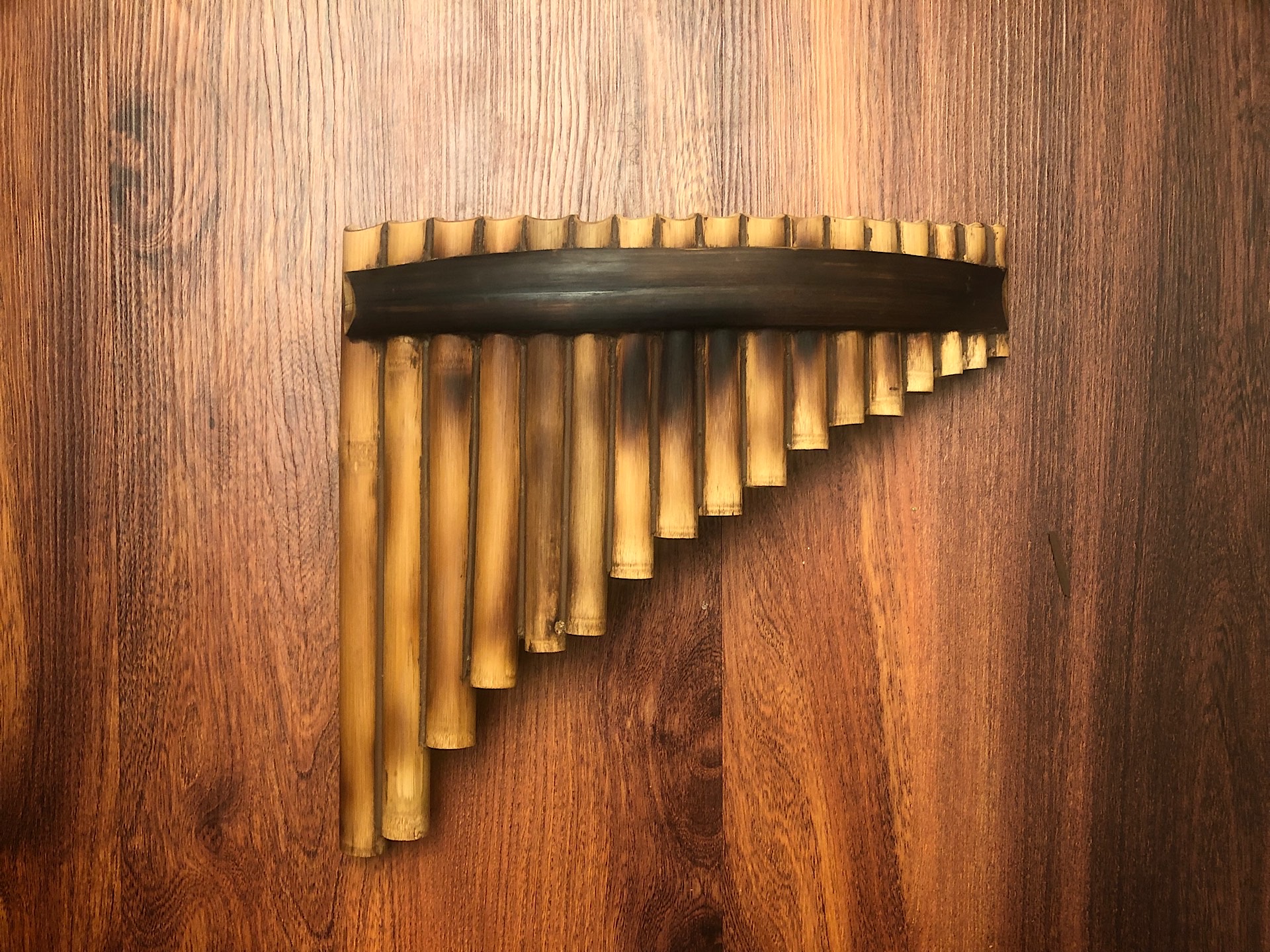 And more importantly, it sounded great and the extra four pipes allowed me to play songs that have more notes. My next recording on DIY pan flute was "Hello" from Lionel Richie:

I'm pretty stoked with how this pan flute turned out to be and lucky for me, not long after I completed this project, I managed to find a bamboo nursery not far from me that has a species of bamboo that ticked all the boxes for a pan flute. I collected a few but now have to wait from 3 to 6 months for them to be dry enough: 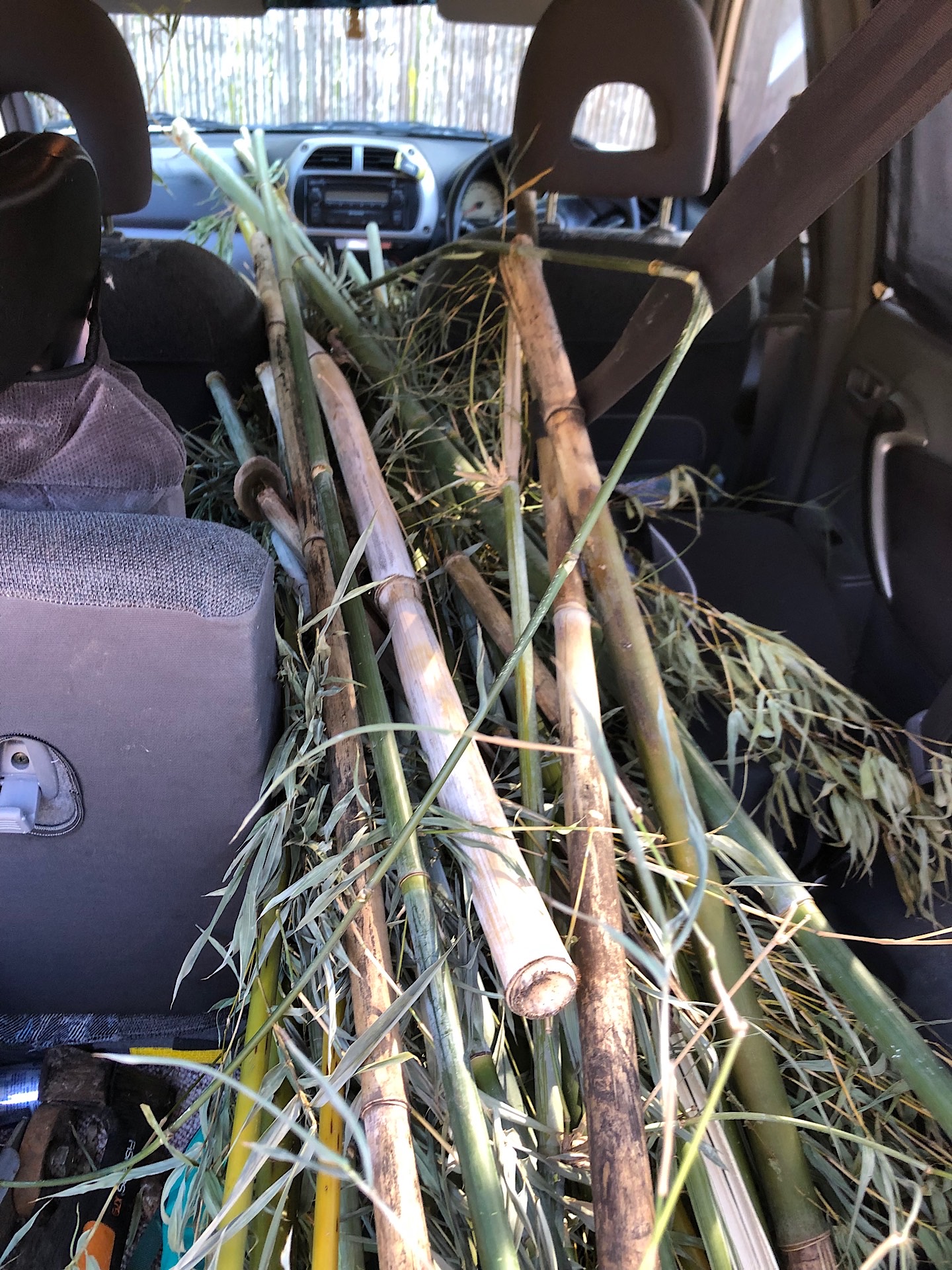 In my previous post about pan flute, I showcased a song I recorded on a Zampoña (aka Siku), a two-row Andean pan flute, I bought recently. Shortly after, a Peruvian friend of mine gave ma a Malta (smaller Zampoña) which had one of its pipe totally smashed in storage. With some superglue, I managed to reconstruct the pipe and had to treat it for mould using fire, essential oil and a lot of sun. 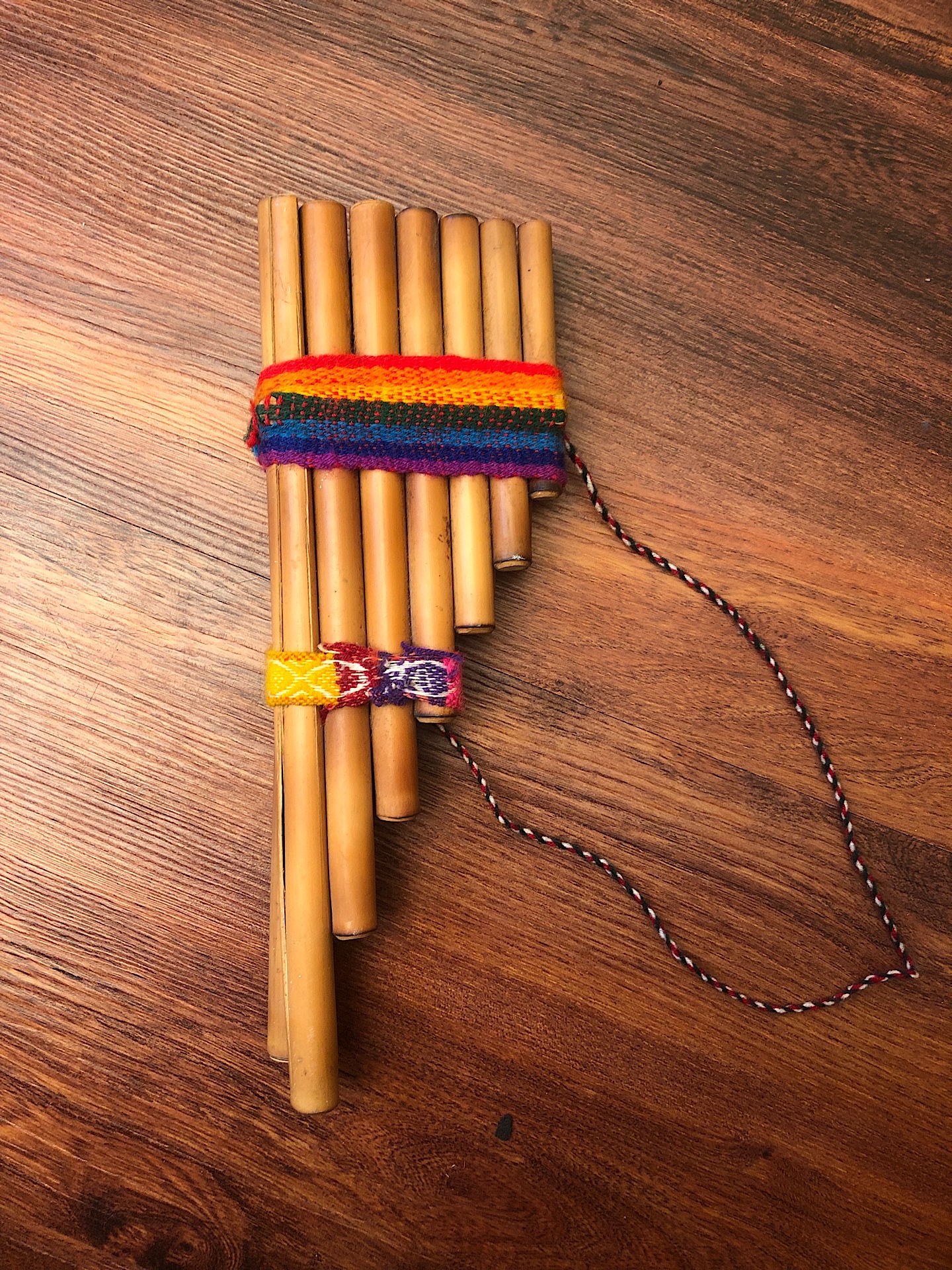 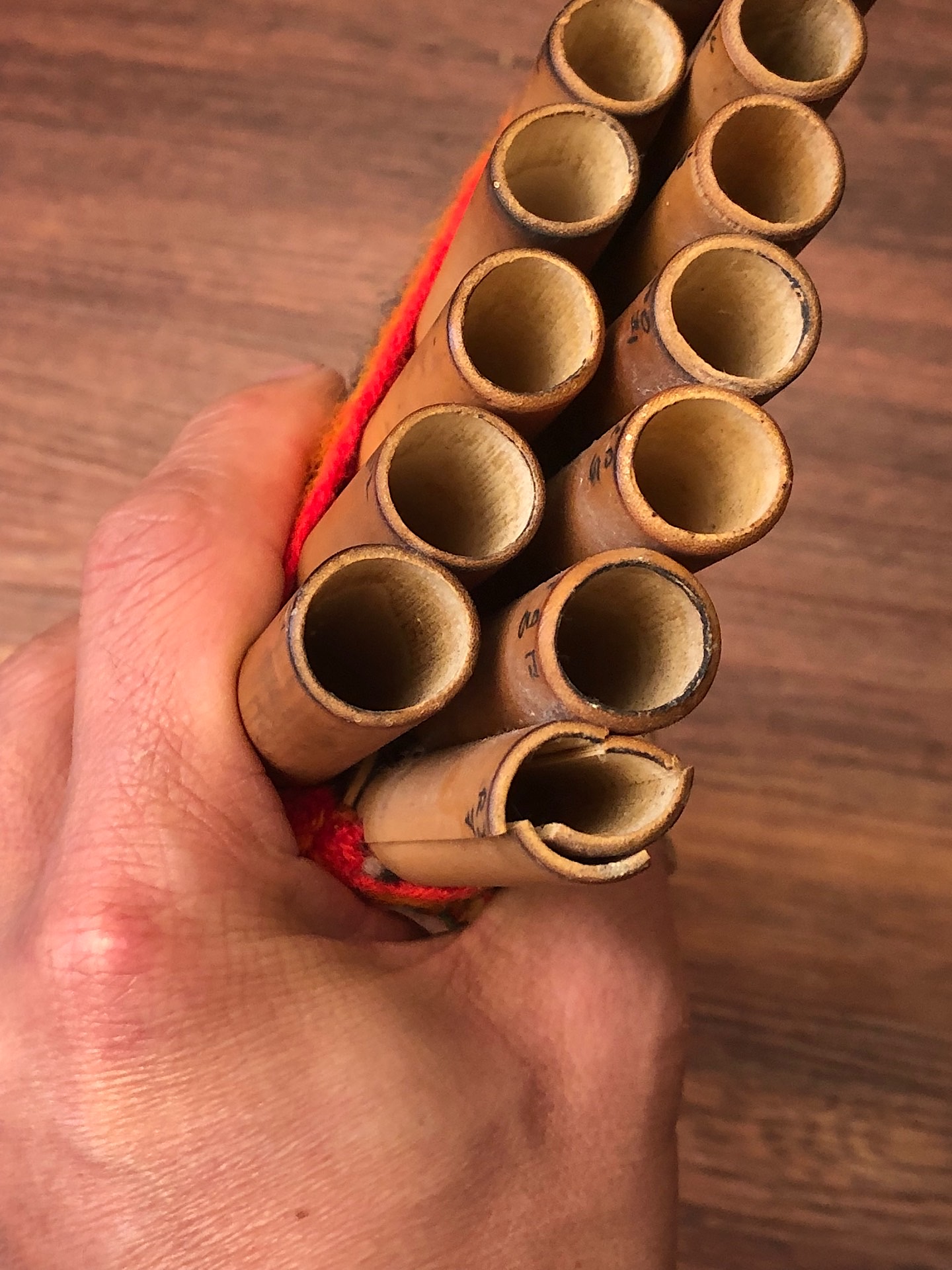 I already owned a large Zampoña and also made a small one for my son from colouring markers: 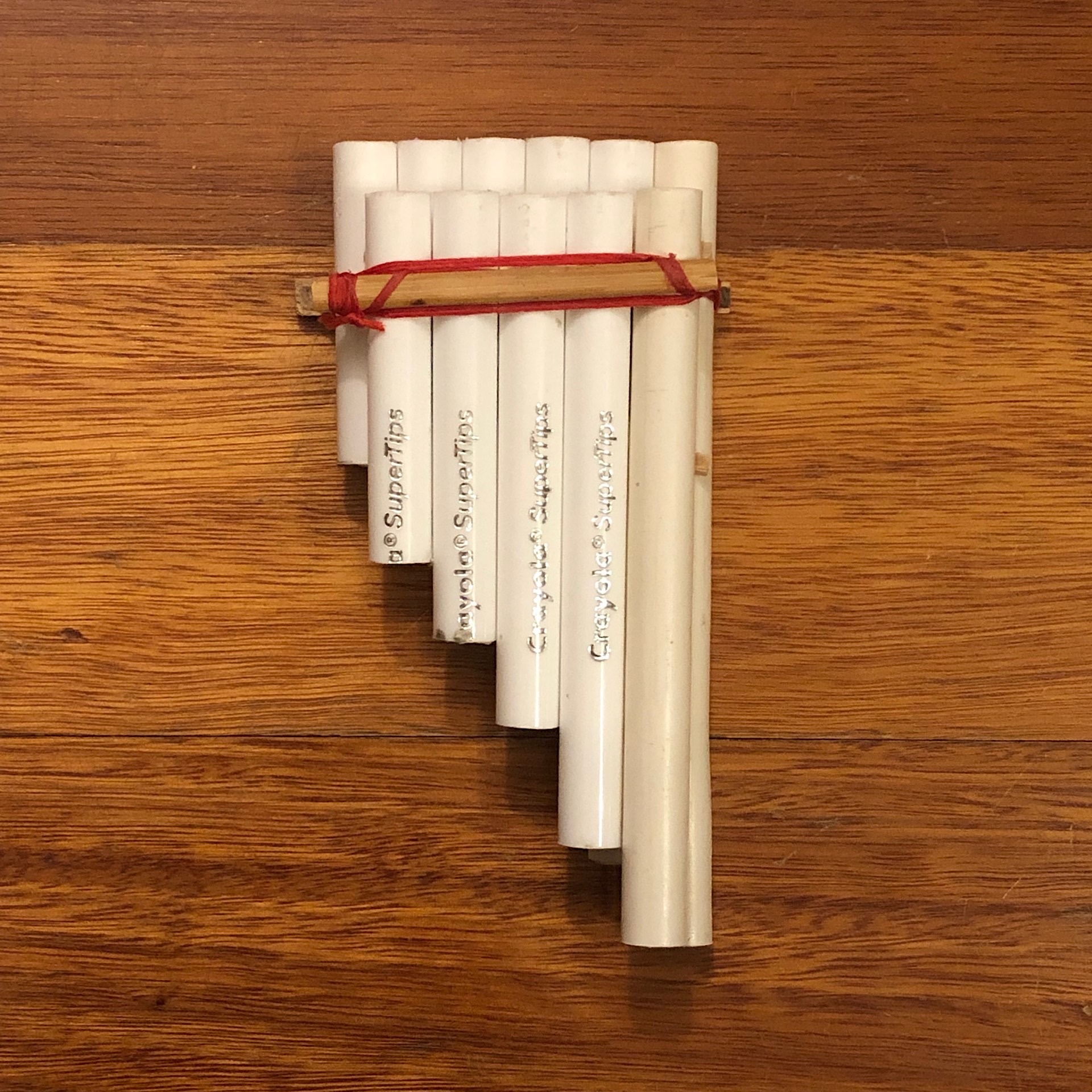 So I decided to turn this Malta into an Antara, a single row Andean pan flute. Using some black bamboo again, I made a new frame for the Antara and used waxed thread to tie the refurbished pipes to it. After some tests, I realised most of the pipes were out of tune, almost half a step flat which as an easy fix using beeswax beads. By stuffing the inside bottom of the affected pipes, I virtually shorten the pipe and raise their pitch. This Antara is now sounding great and is tuned to the key of D. 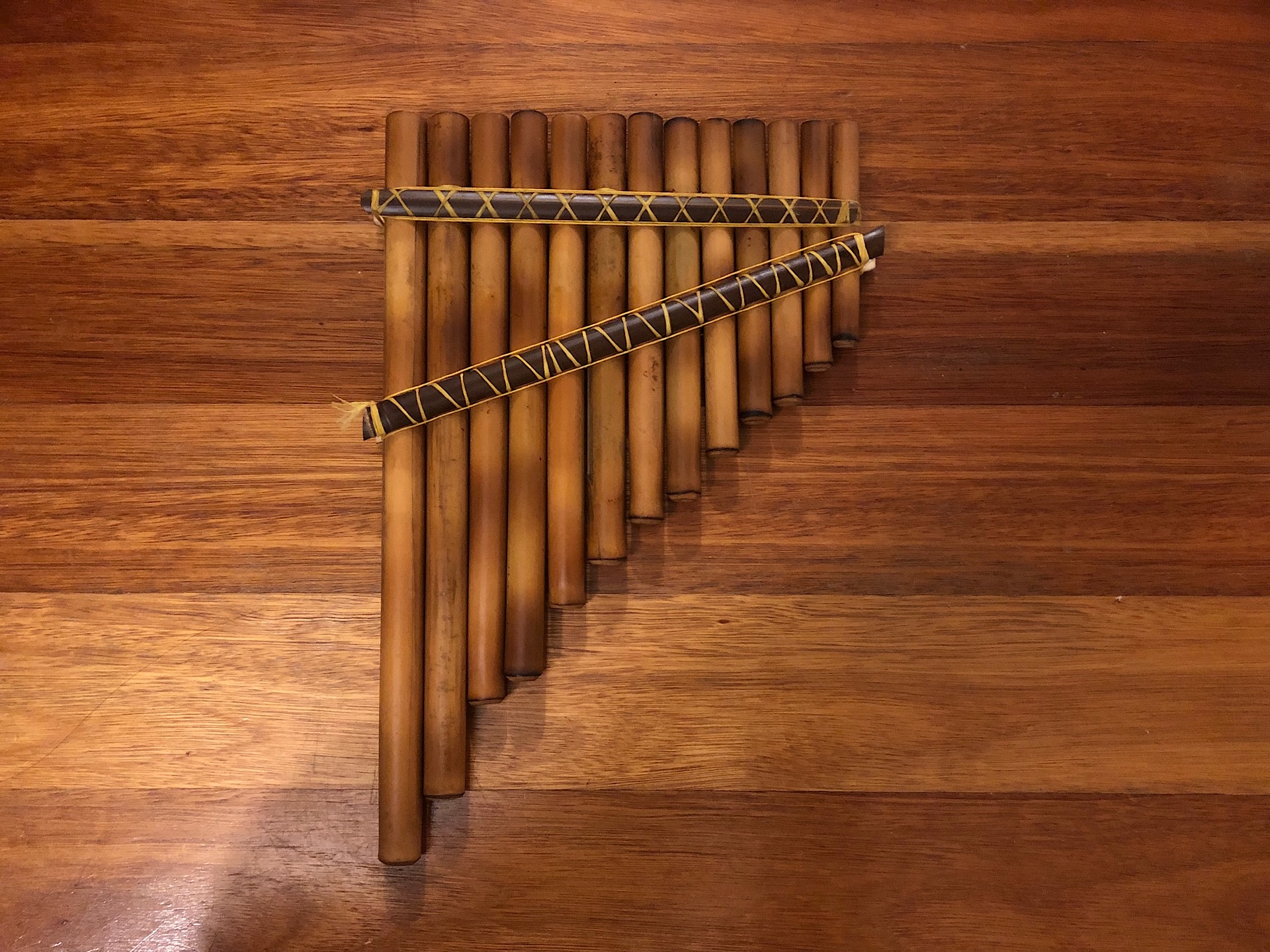 Now, I need to wait few more months in order to make another one. This time I will probably make one that has 23 pipes. I'd like some more lower notes and a couple of higher ones.

Wow, very beautiful. You are very talented, Im sure you know. Thanks.

Damn that's a big pan flute. Both looks and sounds amazing (yeh I have no knowledge about musical stuff but I like it and that's all that matters ;D)

That poor siku D: was it okay after you fixed it?

If you ever feel like figuring out how to make a pendant ocarina I've decided I want one and would much rather pay you than some random on the internet (as much as I respect randoms on the internet who can make things) :)

Hey thanks ☺️
The Siku (now Antara) is good now. Although I need to retie it as the string got a bit loose. I haven't had the time to make a recording with it yet. Will do one soon hopefully.

I did make an ocarina from a branch before:
https://newsclapper.com/video/rRObPz6E3EbpkWA4?ch=HP

Should be able to make it smaller as a pendant with bamboo or wood.

Jeez that was slightly epic O_O

the intro and ocarina reveal was great XD

Also is there anything you can't do o_O

Would be awesome if you could :D and if you do let me know how much you want for it (and/or I can draw or 3d something or write a story for you, that's about all I got in my skillset x_x)

I'll do some tests first and let you know

So you think my pan flute is big?
Think again 🤣

Yeh okay that one wins by a country mile XD 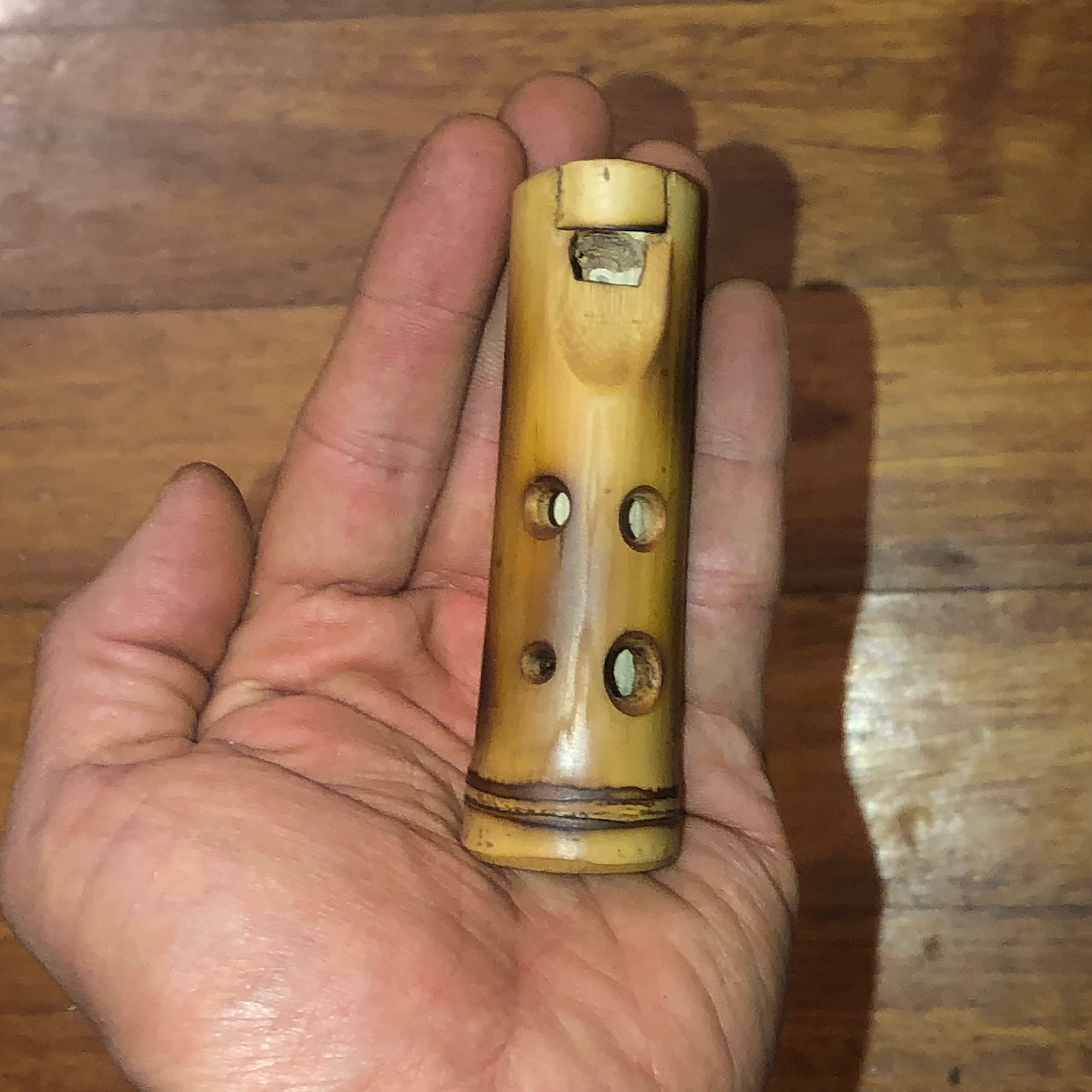 I have only seen such flutes in pictures but I know the plastic flutes aka recorders which are commonly used here. So you know the art of making them. Great, I am sure bamboo flutes would give a better result, am I right!!!

Building a recorder flute is not too difficult. I think I have seen bamboo recorders in the past. I think they would have a warmer sound than plastic.

Very beautiful music. I would say fabulously beautiful music. The information about the flute is impressive, it is a really interesting musical instrument. In a word, after watching the publication, I got great pleasure. For which I want to say a huge thank you. I wish you success and all the best.

Yeah, man this is a pretty unique hobby/craft. Can you see your self expanding and selling your crafts by getting more commercial tools?

It looks like you have a good bamboo source... Is the weather getting warm enough to collect IMO near the bamboo? It is supposed have a really diverse set of microorganisms...

Jk I don't know if you're even doing Korean natural farming anymore. Are you?

I’m already selling some blades from my blacksmith hobby and few bamboo flutes already. Not looking to push it too far at the moment as I already have a day job.

Currently it’s too cold for IMO. I’m not doing much of KNF and worm stuffs anymore. Last flood made a lot of damages to the backyard. We had to ripped off the backyard to fix water infiltration. Been lazy to restart everything so kept it simple.

Right? Well it is too hot to be doing knf over here too.

I can see you are enjoying life mate. =)

Did you record any sounds on it? would be nice to ear it out 😉😊

I meant from yourself! =)

Yeah mate.
First video is not from me, next two are from me :-)

This one and this one

wow, this is looking amazing! I always appreciate some good craftmanship. Well done!

You are a rear genius, I believe this is not the first time you are producing this.

This is an astounding work, congratulations.

I have heard the sound of this instrument in many instrumental songs lately. You did a beautiful work building yours.

Congratulations @quochuy! You have completed the following achievement on the Hive blockchain and have been rewarded with new badge(s) :