Bitcoin's best new Sink that no one's talking about...

The first North American Bitcoin ETF is already soaking up tons of Bitcoin with half a billion dollars AUM...

That's probably because it happened at a time when bitcoin was making new all time highs and then suddenly dropping by 20%+ in a matter of hours...

Basically, if the launch hadn't happened at a time when bitcoin was so volatile, it would be being talked about a lot more than it is.

Based on date from Glassnode, the ETF already has over half a billion dollars in AUM: 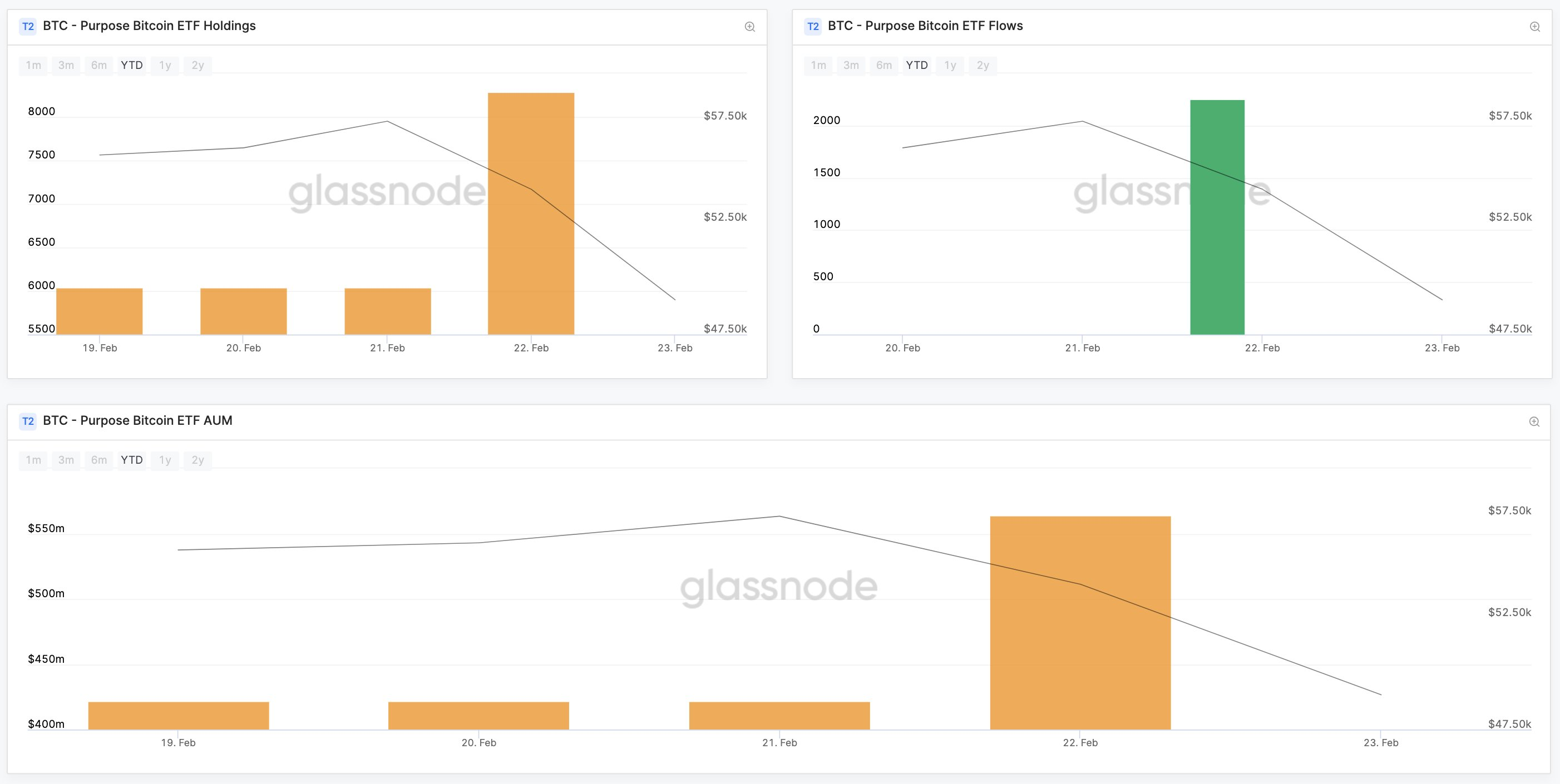 That's great and all but how does that impact the price of bitcoin?

While I don't know exactly how this particular ETF works, I know that it is physically settled with actual bitcoin.

Meaning that investors can take settlement in bitcoin if they so choose.

That means that every share in the ETF would have to be actually backed by bitcoin, something that is very important to bitcoin investors.

Cash settled means no actual bitcoin would change hands and would instead be a derivative betting vehicle on the price of bitcoin as opposed to an actual bitcoin investment vehicle.

The inflows into this further soak up liquid supply sitting on Exchanges and makes it easier and easier for the price to go up...

In fact, the illiquid supply of bitcoin has been growing at a faster pace than the total circulating supply of bitcoin for some time now, pretty impressive considering roughly 900 new bitcoin are created every single day:

This isn't surprising with institutions like MSTR, TSLA, SQ, Grayscale, and others soaking up all the liquid supply on Exchanges.

Now with a major ETF launching, the rate of supply being soaked up is probably going to increase.

With not much supply out there, it will take less demand to send the price moon-ward.

What we have seen so far is only just the beginning of the fun bitcoin investors are going to have in 2021.

Yes, the fun is just beginning. And it's a good thing too. I don't think people have a full realization of just how MUCH new bitcoin is flowing into circulation every single day. I mean, there are 6300 new bitcoin minted every single week. At $50k, that's $315 Million dollars of bitcoin that could potentially be sold into the market every week. And that's without anyone else selling a thing. So, while these big new investors coming in are very bullish, they are also necessary just to maintain the price. Of course, not all of those 6300 coins are being sold. The miners are certainly hoarding some of them for higher prices. Or striking deals behind the scenes to sell them peer to peer to new investors, possibly at a premium. But, it still shows that there needs to be an awful lot of new money flowing in to keep the prices rising. And at any given moment, a large chunk of that could pound into the market and down we go. That said, there's another halving 3 years away, and another after that. The supply is getting smaller and smaller so if you want a piece, better start stacking those sats now....

Yep, the fact that the supply on Exchanges is dropping so much while 900 new bitcoin are coming out every day shows how much is actually being sucked off Exchanges. A ton...

BTW, you sparked an idea for a post I plan to do later on bitcoin demand vs new supply. Thanks for spark! :)

The same will happen to HIVE eventually. It’s just a matter of time like bitcoin.

Oh my boss.
I don't pray or wish to see hive go down the way BTC is doing.

I did not mean about the price.. but instead about the relationship between liquid and illiquidity supply.

Unfortunately I don't think it will, though I am not sure why. No ETFs or Trusts will be coming for HIVE any time soon. Grayscale announced they are looking at creating trusts for about 30 additional coins, but HIVE was not on there list.

Yeah, but HIVE has way more on the bucket (responsibilities) than other coins usually. Technology can't evolve all based on the premise of investment.

I still think it can happen... soon, yeah... most likely not, but it has more and more people by the day and that is just under the same path bitcoin or other coins evolve eventually.

Price-wise, harder to estimate because there is a lot more that can funge progress or evolution. And that is one reason why I love this community.

That is really cool. I honestly don't know a lot about ETF's in general, but I know that things that are exciting with BTC are exciting for all of us. This is some really good news despite the negative news we have been seeing lately. Feels like there are a lot of weak hands out there.

Well, I believe that the BTC bullish movie is about to come to its ends as more hoarders hit the market.
At this point, BTC will have more sellers than investors.

We should make a bet? I think the bullish move is just getting started...

Congratulations @jrcornel! You have completed the following achievement on the Hive blockchain and have been rewarded with new badge(s) :

This is HUGE. I have always hated bitcoin ETFs that used futures. This ETF actually takes supply out of the market. I'm shocked though that it took this long for North America to get one. It just shows though how far bitcoin has come. Seems like everyday it's becoming more and more part of standard culture and no longer this "fringe" thing for cryptoheads. Now if only governments would stop spreading FUD about crypto...

Exactly. The futures and cash settled ETFs aren't very exciting to me. Physically settled ones are awesome.

So there will be actual Bitcoin exchanged for "paper ETF bitcoin"? Will the example of the oversold paper silver ETF be an example that keeps this from launching in the US?

I believe so yes, and no I think the US will launch one by the end of this year.

I agree with you that this is really a big news, which is not very much talked about as one would have expected. Apart from the significant impact it might have on price, it could influence other jurisdictions to approve their own ETFs. Before we realize it, BTC has become an institutional asset. Thanks for sharing.